Within an hour of her internship starting, Dora Totoian was already out in the field and sinking her teeth into what it is like to be a real journalist.

Totoian was part of the 2020 Snowden cohort, reporting in the Yamhill Valley at the News-Register. From the moment she stepped into the newsrooms, nestled among the hills of wine country Oregon, Totoian hit the ground running.

“My editor was like ‘there’s going to be like 500 people downtown in McMinnville and I want you to go out and cover the Black Lives Matter protest right now.’ And I just stood like ‘okay, great but where is downtown? I moved here yesterday,'” she said.

A couple of months before the internship, Totoian had graduated from the University of Portland with a bachelor’s degree in Spanish and Political Science. While at the Portland-based campus, she was a writing intern for The Immigrant Story and a reporter and editor for The Beacon, PSU’s student-led newspaper.
The slight taste of journalism persuaded her to try her hand at the career, which led her to the Snowden program.

Like many other 2020 interns, Totoian’s internship landed in the middle and her internship quickly took on a life of its own; articles focusing on COVID-19, protests, and wildfires filled up her story lists weekly.

“There was never a shortage of things to write about,” she said.

A child of Romanian immigrants, Totoian grew up speaking her native tongue in her household. She said she has always been drawn to telling the stories of people connecting their ancestral languages. One of her most memorable stories hit close to home in that regard.

During the internship, she covered a story on students earning their Seal of Biliteracy, an award given by a school district in recognition of students who have learned two or more languages at a proficient level.

As the expiration date for her ten-week internship came and went, Totoian continued to work on the paper as an intern.

Toto was then offered a full-time position as the newsroom’s government reporter. This was the moment Totoian had been waiting for —to put all she had learned during her internship to the test.

For almost a year, Totoian reported on the mechanics of a local government and their impact on a city’s structures. But in the summer of 2021, Totoian packed her bags and moved to Salem to work at the Statesman Journal, covering farmworkers in the Willamette Valley. In 2022, Totoian made the jump to another sector of communication. She now works as a communication coordinator for the Oregon Human Development Corporation.

Although she has slightly strayed from traditional journalism. Totoian said the skills she learned during her internship are embedded in the work she does every day.

“I think a lot of things that I learned during journalism can be applied to communications jobs and are so relevant,” she said.

“The internship taught me to be resourceful. You are dropped into this completely new world where you don’t know anybody and don’t know what topics are important and you figure out along the way how to serve that community,” she said.

No matter what path Snowden interns take, Totoian said the values and morals they pick up along the way in the internship would stay with them.

“Journalism is a very honorable profession but I think journalists tend to only think that they can have an impact if they stay only in journalism,” she said. “You can still make a difference, and hold power accountable and believe in this idea of a better world through journalism.” 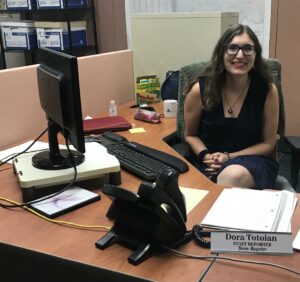