It was the early 2000s and Eder Campuzano decided that journalism was his dream job.
During the end of his freshman year of high school, Campuzano had the choice to shadow someone in a profession of his interest.

At the time, he was playing around with the idea of becoming a cartoonist when he was older, and since his friend had plans to shadow a reporter at that time, he found himself sitting at that News-Register newsroom in McMinnville, Oregon.

Several years later, Campuzano would return to that newsroom as a Snowden intern as part of the 2010 cohort.
“I ended up sitting down with a reporter and that was when the seeds were planted,” said Campuzano.
When Campuzano graduated high school, he was still an undocumented Mexican immigrant. So he moved to Eugene with some friends, and although he wasn’t a student at Lane Community College then, he still asked the college’s newspaper if he could report for them. He ended up being the managing editor for the paper that entire year.

“I still wanted to be in journalism and when I went to school it just seemed like a natural fit to join the paper,” he said.

He originally heard about the Snowden program from the college newspaper’s advisor, Frank Ragulsky. Campuzano said he made it no secret to others that he wanted to work at the Oregonian one day. Regulski noted that the best first step Campuzano could take is with the Snowden internship.

“The most heartening thing is that I got a letter of recommendation from Frank that told the Snowden board ‘this guy isn’t just ready for an internship, he’s ready for a job. He’ll hit the ground running for you and is dedicated to this career path,'” said Campuzano.

Campuzano was placed in his hometown’s newsroom and remembered walking in his first day overdressed.

“I showed up in slacks, a button down shirt tucked in and this really gaudy tie with products in the hair. Then I came into (the newsrooms) and saw how reporters dress —jeans and a polo,” he said.

From local politics to a neighborhood tree on the chopping block, Campuzano’s professional portfolio started to thicken, as well as his appreciation for his hometown.

“Because I grew up in McMinnville, I thought that I wouldn’t have the same opportunity as others to dive head first into a new community like everyone else gets but that my attitude turned around within the first couple of weeks,” said Campuzano.

Soon, he took over the ‘festival reporter’ role and started covering aspects of his hometown that he hadn’t yet discovered.

“I really got to know the area that I grew up around really, really well,” said Campuzano.

After leaving McMinnville, Campuzano returned to Eugene and transferred to the University of Oregon. After graduating with his bachelor’s in journalism, he fulfilled his dream of working for the Oregonian with a summer internship. From there, Campuzano worked for the Grants Pass Daily Courier as a government reporter before returning to the Oregonian as a full-time reporter.

He worked his way from the Trending desk to an education reporter until he left in December of 2021. Campuzano currently works for the Star Tribune in Minneapolis, covering K-12 education across the state.
Reflecting on his time in the small newsroom in wine country Oregon, Campuzano advises aspiring Snowden interns not to hesitate and do so. He said the Snowden program gears aspiring journalists for sustainability careers in the field.

“I feel like if you really want to pursue journalism as a career, no matter where you go afterward working at a small newspaper will give you the skills that can transfer literally everywhere…Beyond that, the (Snowden program) also gave me affirmation that I chose the right career path.” 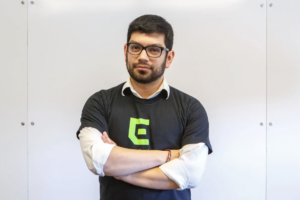