“Imagine there’s been a natural disaster in your area,” said Roman Battaglia, sitting in a recording pod somewhere in the middle of the Jefferson Public Radio’s newsroom.

“You’ve lost power, it’s impossible to get in your car and drive somewhere safe, and most importantly, the cell towers are down. How will you get in contact with friends and family to tell them you’re alright?,” Battaglia read into his condenser microphone.

It was 2019 and Battaglia was on his final leg of his Charles Snowden Internship. He was reporting on a story about how amatuerur radio operators play a crucial role in disastrous events.
A few months later, that same story would take home the Bill Leonard Professional Media Award for Audio Reporting.

Before becoming a Snowden intern, Battaglia had just finished his undergraduate studies at Oregon State University, earning himself a degree in Digital Communications.

His passion for public radio was influenced by a love for music and technology. During college, Battaglia had teased the idea of journalism, joining his university’s radio station his sophomore year. He later became a podcast director during his junior year and station manager the subsequent year.

He decided to apply for the Snowden program in hopes of landing an internship with Jefferson Public Radio, as it was an affiliate with NPR.

“I was at the point where I was figuring out if journalism was the pace where I wanted to be,” Battaglia said.
A few months after pushing send on his Snowden application, Battaglia packed his bags and made his way from Corvallis to Ashland, Oregon. On his first day as an intern, he remembers being terrified.

“It was really terrifying. I was moving to a completely new part of Oregon that I’ve never lived in before, in a house with people I had never met. It was very scary but luckily my editor was very nice and helped me get started and get into the swing of things,” said Battaglia. “But I remember thinking: ‘I am in an actual newsroom doing real journalism work’.”

During his internship, Battaglia tackled stories from local and national politics to an annual football game between Oregon and Japanese youth. But one memorable moment that stuck out to Battaglia was not in the newsroom but rather on a float in a Fourth of July parade.

“It was the 50th anniversary of JPR when I was (internshing). It was really fun to just be part of this team at JPR, because everyone there is super welcoming and friendly,” he said

After Snowden, Battaglia packed his bags and moved halfway across the country to join Delaware Public Media as a Report For America fellow. In 2021 he returned to the west coast and JPR as a full-time public radio journalist.

He also took part in the Next Generation Radio Program from NPR. During the week-long workshop, Battaglia produced a multimedia story on the immigration experience in Sacramento, California.

Reflecting on his days as a JPR intern, the now-professional radio host said that the Snowden program gave him the building blocks to create a lasting career in a field he loves.

“I definitely learned — I mean literally everything — about what it means to work in public radio,” said Battaglia. 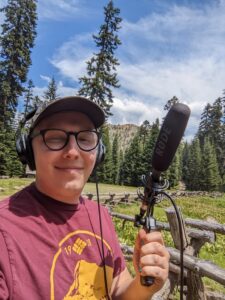